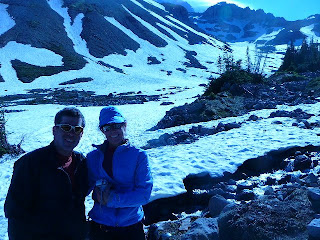 The allure of Mount Rainier for climbers and skiers is much like a moth to the flame. Hard to resist a big snow covered mountain, so Sally and I gave in and headed up the Emmons Glacier July 12-13. Sally and I share our East Coast roots, which helped create the trust needed to convince her that she should ski Rainier for her first glacier climb…. We headed up the Interglacier after trail damage and soft snow slowed us down but we made to camp by 6:30. Our welcoming committee to Emmons Flats included the all wise group leader asked us if we had read the forecast for high winds and if we were prepared to ski boiler plate snow. I thanked him for his wisdom, continued to set up camp and settled in to sleep by 9:30.

The wind decided to blow on Sunday so we delayed our start till 4:30. Like wine, best to wait till the snow is ready to ski, otherwise the crust tends to disturb a perfectly good descent. The track was in so we followed the yellow brick road and depoted the skis at 12,500′ due to big, open crevasses and increa 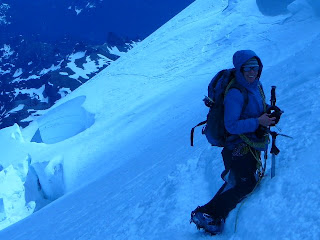 The route traversed all the way across the Winthrop glacier which added a lot of extra travel which allowed the 40+ mile an hour winds to pummel us that much longer. Sally pondered the value of the summit versus the skiing. At almost 14,000′ she decided that she was too close to the top and would suffer the rest of the way. 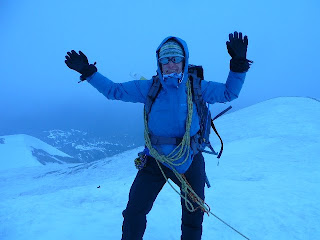 we headed down and arrived at our skis an hour later. The sun had come out and the winds mellowed enough to soften the snow. A pair of skiers had sideslipped the route for us so we were psyched to click in and make some turns!

Softening penitentes made the skiing challenging. We side slipped through some interesting crevasses but managed to whoop it up into camp. The best turns were on the Interglacier some 12+ hours after we started our day and Sally mentioned something about her legs were over it. 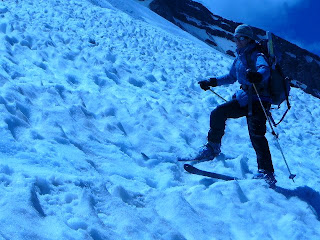 With noodle legs we cruised the last 2000′ of perfect corn into Glacier Basin, passing several large parties on foot. The best turns finished at the creek so we unclicked and packed our skis down to the car for our well deserved cold beer!