Between 6-7 pm Sunday and 5 am Monday Chair Peak Basin ripped wall to wall running full path over running the small knob above Source Lake for several hundred feet leaving a meter of debris and wiping out the small stand of trees many of us take breaks and observe terrain from a ‘safe place’. Despite many seeing an avalanche of this size for the first time in Source Lake, there have been 4 documented accidents with the events of 1974 and 2002 producing avalanches that were rated Class 4(not directly related to the D Scale). While each event is unique at the time it happened, history tells us this place produces large avalanches frequently, very large avalanches between once a year to every 2-3 years and D 3.5 every 10 years. Charlie Rubin checked with the Alpental Ski patrol and they said,
‘Perhaps the biggest natural slide years are not just the Chair Peak paths but other Alpental Slide Paths including Sharon Bowl to bottom of Trash Can and Stokes to bottom Mushroom below the falls in 01/02, 07/08, 10/11 or 11/12. It might have been in 01/02 that the avy crown went much farther than Chair this cycle. One of those cycles (01/02 or 07/08), Chair Peak and Draft Dodger debris merged. An old volley told Aaron that in 1974 when the girls were killed at Source Lake, Chair Peak avy stopped just above the falls near Mushroom.’

Chair Peak reminds us why there are such small trees surrounded by beautiful old growth forests. The vegetation around the knob has not changed for years, with younger trees leaning down valley, flagging and signs of a historic event similar to the Phantom. The difference between the Phantom and what happened Sunday night/Monday morning is size and frequency. We may never see the Phantom slide full path again and Chair Peak will produce another event likely in the next 10 years. The past informs us the Complex nature of Chair Peak means its position and configuration create the ability for the slopes to accumulate and produce many D2s annually and D3s once every 1 – 3 years. The Phantom have not even produced a D2 annually because of the rare combination of weather, snowpack and terrain that makes it a 1 in 200-500 year event based on the forest (Old Growth 200-400+ years old) it destroyed.

Bruce Jamieson put a visual tutorial for the D Scale here. The ATES technical definition refers to Complex terrain as producing D3s annually greater than or equal to 1:1. Chair Peak sits in a unique position as the highest feature in Alpental Valley with its ridges oriented NW-SE. This orientation seems capable of capturing the bulk of storms coming out of the SW-NW. Below I included Wx summaries of documented accidents and referred to by the Alpental Patrol.

Weather Summary In 1974 from Snowy Torrents;
…18” of new snow fell January 26. This new snow fell on top of 8 feet of snow that had fallen during the previous week and brought total snow depth to 116 inches. By 08:00 on January 27 an additional 7.5 inches were measured. During the day the temperatures rose above freezing and rain began to fall.

Weather Summary In 2002 by John Stimberis;
’The weather leading up to this event was fairly dry for the early part of the month and only six and one half inches of snow fell during the first eleven days of January. The following weather has been extracted from a nearby 3000 ft elevation study plot. The 11th and 12th of January produced ten and one half inches of snow and 2.42” rain. This was followed by three dry days with low temperatures in the low twenties to upper teens. An inch and a half of low-density snow fell on the 17th followed by a cool dry day. The morning of the 19th brought ten inches of new snow at nine percent density, followed by two days in which nineteen inches of twelve percent density snow fell. The morning of the 22nd saw six and a half inches of four percent snow, with the next two days adding fourteen inches of very dense snow (averaging fourteen percent density). The new snow was accompanied by 1.09” of rain. The day of the 24th saw temperatures right around freezing with precipitation changing between snow and rain at nearby Snoqualmie Pass throughout the day. From 0700 to 1800 hrs on the 24th 1.11” of precipitation had fallen at an average rate of 0.09”/hr. The hour preceding the slide reported 0.13”/hr. Temperatures throughout the day were in the low to mid thirties at the base of the nearby Alpental ski area (3200’) and close to thirty degrees at the top of the area (5400’). The 26th of January brought clear skies to the area. Large fractures were seen on Chair Peak above Source Lake. Alpental Patrollers reported several large fractures both during and sympathetic to control measures on the 25th. Fractures up to six feet were seen both in and out of the ski area. It is likely the avalanche that reached Source Lake on the 24th started high on Chair Peak and was a class 4 avalanche, traveling approximately 2000 ft vertical. Estimates of the fractures on Chair Peak are in the six to eight foot range.’

The conditions that produce these cycles includes a large storm cycle of greater than 2 meters mixed with a warming event. While the SWE may vary, the volume in a short amount of time combined with temperatures climbing to or above freezing remain a consistent characteristic. Sunday-Monday certainly had the same conditions:

Weather Summary from NWAC Snoqualmie Pass Fx Sunday evening 2/28;
‘Warming temperatures will add uncertainty to an already complex snowpack that has seen a massive depth increase in the last 5 days. Snoqualmie Pass has picked up 42″ of snow since Feb 25th with the last several inches arriving on a warming trend that ended with rain at pass level.
With all the recent storms, tracking the layers in the snowpack can grow tricky. While numerous potential layers and interfaces exist, three really stick out in our minds.
1. 2/25: At the base of the most recent storm snow you may find graupel, buried surface hoar, or a thin crust depending on aspect and location. This interface sat 12-18” below the snow surface on Saturday afternoon and may become shallower as the snowpack consolidates.
2. 2/23: A firm layer formed by last week’s atmospheric river may present as a stout crust up to ~5400’. While this layer has not produced avalanches, it can act as a marker and a means to interpret other storms. On Saturday, this layer was found roughly 3’ below the surface.
3. Mid-January: This facet-crust combination continues to stir conversation and fear. This layer is DEEP! And it will be extremely difficult to observe. You can probe for this firm prominent crust and may find it (if your probe is long enough) 9-10ft (275-325cm) below the surface.’

Why does this matter? Deep Persistent Slabs are difficult to predict what will trigger them and when warming is involved the likelihood goes up. Chair P 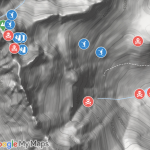 eak suffers from multiple aspects that shed which can trigger larger slabs which makes touring around Chair Peak dangerous especially when the Avalanche Hazard/Problem are connected to slabs and warming. These problems have a long history in the Alpental Valley and the Complex Terrain above Source Lake make it one of the more dangerous zones in Washington for all winter recreationalists. Since 1953, 11 out of 34 people who have died at Snoqualmie Pass were either at Source lake or on Chair Peak. This includes snowshoers, ski tourers and climbers, many of them were just in the wrong place when these very large avalanches occurred.

What does this mean when touring above Source Lake? Hard now to forget what just occurred so now we know why Chair Peak is Complex Terrain and see the range of where slides go when they reach D3 and larger. History helps us respect what the terrain above is capable of producing so hopefully we keep this in mind when making travel plans with Considerable Hazard and Avalanche Problems that may produce Very Large avalanches.