Snow is falling in the high country across the west and I am feeling a strong buzz that needs to ski! On that note a quick look at our quiver of skis and see what the new season has to offer us. For myself, I look for 3 to 4 types of skis to cover my season.

For inbounds/resort skiing, I like to have an all mountain ski for powder and off piste, then a set of carving/race skis for firm conditions and fast skiing. My all mountain ski is 95-110 under foot with regular alpine bindings or a Marker Duke or Baron, since I will do limited touring and more hiking around the resort. The carving/race ski is optional, however Salomon or Volkl offer you an opportunity to enjoy hardpack and carve it like a samurai with a new blade. 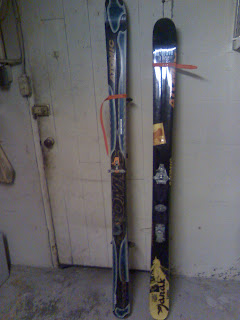 For the back country ideally two set ups will give you the best range for the variability of the snowpack throughout a season. My first set is a fat ski with a dynafit binding for early to late season deeper new snow conditions. This ski should handle powder, crud and some firm conditions equally well. With the new design of reverse came tip and zero camber in the rest of the ski, this generation of skis bring a dedicated tip that will float to the top effortlessly while allowing the rest of the ski to engage in dicey conditions.

The second touring ski is usually much lighter and narrower at the waist.  It will also have a dynafit binding.  This ski will be used for pre-season snow patch searching expeditions.  After the first big dump of the season, this ski won’t get pulled out again until late April and into the summer volcano season.

While it is nice to have a quiver of 4 skis, it is possible to get away with only two pair of skis, and maybe even..yes, I’ll say it…one pair of skis.  If you are looking to add to your quiver, I would highly suggest trying out the new non-traditional cambered skis.  They will allow for the best powder days to become the best powder days EVER!  As a one ski quiver goes, remember to buy a ski for the conditions that actually exist where you are skiing them and make sure your boots fit.  Often times a new boot can make an old ski feel young again!

Check out the new series of ‘tech’ bindings.  Dynafit has become the Kleenex of lightweight touring bindings, but now there is a new player in the market.  G3 (better known for their tele bindings and skins) has released a new binding that can be used with any ‘dynafit compatible’ boot.  The term ‘dynafit compatible’ will be going away and the term ‘tech compatible’ will become the norm.  Now that there is more than one player in the game, I guess we must change our old ways…hmmm.