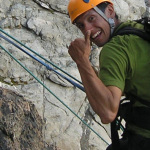 fell in love with the mountains at a young age while climbing Ecuador’s volcanoes with his family-owned mountain guide company. He has been guiding in the Andes since 1999 and has been guiding for the past six years in the Northwest United States. In 1997 he expanded his adventure skills by taking on rock climbing. He represented Chimborazo province three times as the Ecuadorian National Rock Climbing Champion. In 2002 he moved to the United States to study English at Eastern Kentucky University. While in the U.S. he has spent his free time exploring the vast alpine, mixed, ice and rock climbing areas, throughout North America. He completed his UIAGM Alpine, Rock & Ski certification with the Bolivian Mountain & Trekking Guide Association, accredited by the National School of Ski and Alpinism of Chamonix (ENSA), and has completed Ski Guides Courses and Exam with Argentinian Mountain Guide Association (AAGM).